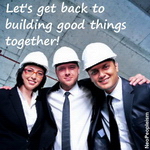 Here in London, Ontario there was a long (2 month) labour strike, as members of CUPE Local 101 struggled to resist the City managers’ attempts to micro-manage and excessively control their work, benefits and promotions. (http://101.cupe.ca/2015/07/06/media-release/)

It is sad and frustrating to see the City managers being such bullies, and trying to grab more and more control from their employees. They don’t yet understand that the business-is-king era is coming to a close, and that community and shared participation are coming into focus. While money is important, people and quality of life need to be shown as being more important.

Here in London we are seeing how wrong things go when managers try to take excessive control and employees try to stand up for quality of life. Even here are old-school managers still trying to keep employees under their thumbs instead of opening their hands to cooperation and shared efforts. They are dinosaurs – hoping to be even bigger dinosaurs, and don’t want to recognize that the meteors of social change are impacting people around the world. 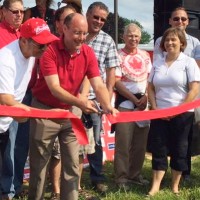 While the strike was finally settled, the mayor (Matt Brown) and the city councilors were silent during the strike, supposedly to not interfere with how the strike was resolved. But in actuality, the people of London need these municipal leaders (many of them fresh to city hall) to be vocal in encouraging city decisions to value hard-working people and to talk-up the importance of community.

As a side-note, Mayor Brown is great about appearing at community events and looks very chipper and friendly in photos (Mr Brown is in red, from his Facebook page). Sorry, that is no longer sufficient, and I hope that the mayor and councilors do some real soul-searching and reading about the economic inequality ruining lives.

Strike-wise, the City of London did finally rescind their demand that the employees work on Sunday, which they could not prove was needed. But the inside workers still accepted working 6 days a week, and getting a pittance of a raise.

It was sad to see how, right here in our our city, managers continue to overstep what is reasonable in this new era.

Even worse, many Londoners voiced the “we suffer so they should suffer too” mantra, saying that the inside workers had it better than they did so they shouldn’t complain about being treated poorly. That type of race-for-the-bottom mindset is terrible and sad to hear, and it plays right into the hands of big corporations who are increasing their wealth thanks to increased productivity, even as they cut wages and convert full-time work into temp work without benefits.

How are we going to make the world better for people if we aren’t working together, respecting shared goals and community?