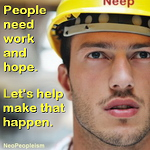 There is so much money in our world – far more than there has ever been. And people are more productive than ever, generating more wealth, but not for themselves. Almost all new wealth goes to those already rich, who sit on that money rather than creating new businesses or jobs.

When will people stop believing disproved economic assumptions and get some politicians on their side?

There are 4 falsehoods that keep the rich from sharing prosperity with us. These false assumptions are repeated by certain media, politicians and corporations, despite the statements being proved wrong. Thanks to Robert Reich and Bill Moyers for this information, and for their commitment to fighting #extremegreed. 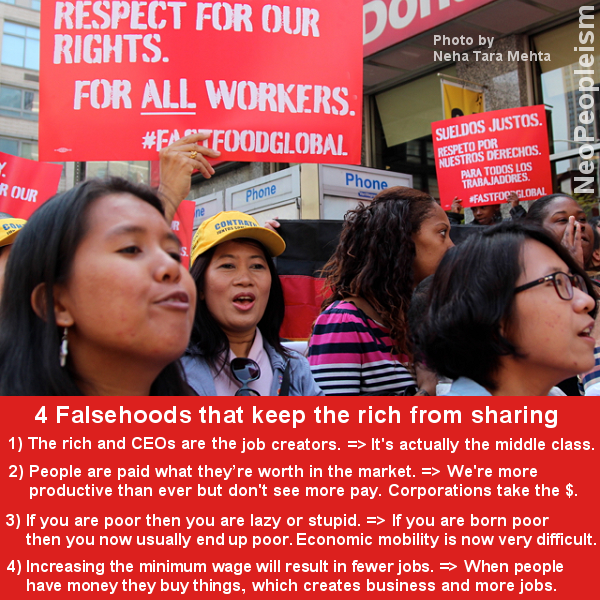 1) The rich and CEOs are the job creators. False. => It’s actually the middle class.

2) People are paid what they’re worth in the market. False. => CEOs get ridiculously high pay, and workers are more productive than ever. It’s just that the corporations take those new profits for themselves.

3) If you are poor then you are lazy or stupid. False. => People used to be able to work hard and get ahead, but now there is very little economic mobility. So if you are born to a poor family you will likely end up being poor. This is a hard one for middle class people to get their heads around, since they are far more advantaged than most people struggling with poverty.

4) Increasing the minimum wage will result in fewer jobs. False. => Henry Ford understood way back when that if you pay people well then they can afford to buy things, which builds business opportunities and creates jobs.

Here’s to more people understanding these economic falsehoods, and to finding politicians and business leaders who understand that regular folks need a fair share of the prosperity they are generating.

The problems in our economy & society are largely due to bad policy decisions that favour giant corporations and the rich. Politicians and business leaders, hear this well: Whatever you do next it’s got to be good for the people. http://neopeopleism.com/2012/08/what-we-do-next-has-got-to-be-good-for-the-people--neopeopleism.html @SenSanders @ewarren @AOC

We've arrived at a glorious goal for #extremegreed: no proper taxation. The rich used to get richer by building factories and providing more jobs. Now they use hedge funds and dodge taxes, denying our society the shared prosperity we used to be part of. http://neopeopleism.com/2021/04/greed-has-never-been-so-good--neopeopleism.html

Our economy needs a reset, to get the focus back on what serves people and society - not the billionaires and giant corporations. http://neopeopleism.com/2012/08/its-time-for-a-reset--neopeopleism.html